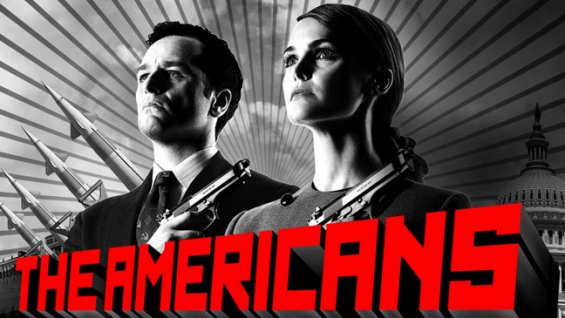 The Americans was a surprising find for me.  I knew the concept, KGB spies living undercover in America, but I had not expected it to be such a human story.  The show’s creator and former CIA agent-turned-author, Joe Weisberg, has described the series as being ultimately about a marriage.

Philip and Elizabeth Jennings (Matthew Rhys and Keri Russell) are two KGB spies in an arranged marriage.  They were both recruited by the KGB in Russia when they were very young, and they were complete strangers when they were sent to the U.S. to pose as Americans.  They live in suburban Washington, D.C., shortly after Ronald Reagan is elected president.  As part of their “cover” they have two children, teenager Paige and preteen Henry, who are unaware of their parents' true identities. Their complex marriage becomes more passionate and genuine each day, but as Philip begins to warm up to America's values and way of life, his relationship with Elizabeth becomes more complicated.  She feels it is important to hold onto the values of the mother land and even hopes to return home one day. He does not share that dream.

Further complicating their marriage are the intimate, dangerous and darkly funny relationships they must maintain with a network of spies and informants under their control.

The couple routinely receives orders from their KGB handler and they are sent on missions that often require them to flirt, have sex, and even develop relationships in order to keep their cover and complete the mission successfully.  In order to ensure the continued loyalty of one his trickiest sources Martha, Philip, in disguise as FBI bureaucrat ‘Clark’, ends up marrying her.
Other issues continue to plague them.  While they are dealing with their 14 year old daughter Paige’s growing curiosity about her parents late nights, they receive news that the KGB is planning to indoctrinate Paige soon.  Then, add to the mix the arrival of the Jennings' new neighbor, FBI agent Stan Beeman, who is part of a new division of the agency tasked with fighting foreign agents on U.S. soil, and the tension certainly mounts.

It is well written and the acting is quite good.
Matthew Rhys is particularly good in his portrayal of Philip, a man of disguises and multiple identities. There are a lot of action and “nail biting” scenes, as well as quite a bit of sex and mild nudity.  Every few episodes, viewers are treated to views of Keri Russell’s naked backside.

There have been 2 full seasons and they are just starting a third.  Overall, I give it thumbs up.