Why Are We Still Taking Off Our Shoes? 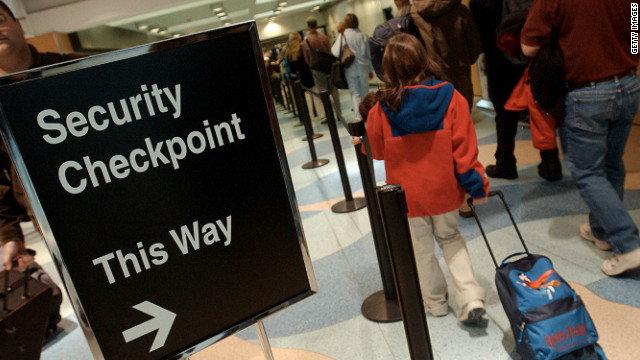 Why do we take off our shoes to go through airport security?  Some of you are probably saying, “Because of the shoe bomber, of course.”  Ever since some guy put a bomb in his shoe, we've been taking off our shoes in the airport.  But, didn't some other guy hide a bomb in his underwear?  Well now, that little security measure just wouldn't be practical would it?  So, I find fault with the shoe thing.

Have you flown recently?
I flew Southwest Airlines 2 weeks in a row this month, and both times my printed boarding pass had the words “TSA PRE” stamped at the top.  When I got to the security line, I was waived through to a separate line, conveyor belt and screening device.
Shoes and jackets remained on and liquids remained in bags.  I asked the TSA agent how I rated that privilege and was told it was totally random.  So, a randomly selected group of flyers are given preferential treatment during security screening, and allowed to leave their shoes on.  Once again, I find fault with the shoe thing.

If every single passenger isn't required to take off their shoes to make sure they don’t have a hidden shoe bomb, then why even one single passenger?  Seriously, let’s count the holes we've already discovered… 1) Patience pays – the bomber waits for their lucky day when they see the words “TSA PRE” printed on their boarding pass; 2) It’s a family affair – seriously, someone willing to sacrifice themselves would probably be just as quick to sacrifice a child under 12; 3) Send the old guy – I don’t think suicide bombing has an age limit; 4) You can leave your underwear on – ‘nough said.

I am all for doing anything necessary to keep our planes safe, but if it is nothing but show then I find it very aggravating.  The rules regarding what can be carried onto an aircraft are about as arbitrary.

Knives of any kind, shape or size are prohibited in carry-on luggage.  On a flight last year, I watched a lady discard an heirloom pocket knife she said had been her grandfather’s and her father’s because the TSA security agents found it in her carry-on and said it was forbidden.  And yet, on my last flight, a woman across the aisle on the plane was making jewelry and had a pair of scissors with 3 inch blades.  Scissors with up to 4 inch blades are allowed in carry-on luggage…isn't that pretty much the same as two 4 inch knives?  I find fault.

Club-like items such as golf clubs, hockey sticks and pool cues are not allowed as carry-ons, but walking canes are allowed.  No doctor’s note or medical proof is required for the walking cane, they are simply allowed while the other items of pretty much the same shape and size are not.  I find fault.

While I am certainly not saying that I have the answer, or that I want security to be more lax, I can’t help but wonder how many of the rules we so blindly follow have nothing to back them up.  Are they just a mummer’s farce meant to keep the sheep in line?  And, in the meantime, who is really protecting us and what are they doing to keep our planes safe?  These inconsistencies in security bother me greatly.  And don’t even get me started on the whole lie about cell phones and electronic devices…

What do you think about the airlines security policies?
Posted by Suzi Youngberg at 4:17:00 PM
Email ThisBlogThis!Share to TwitterShare to FacebookShare to Pinterest
Labels: Suzi's Soapbox, Travel