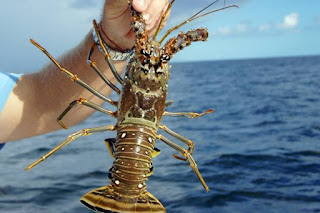 In the Florida Keys, the two day sport lobster season, better known as "Mini Season," is this week, Wednesday and Thursday, July 29 & 30.
The Sheriff’s Office would like to remind everyone the two day sport lobster season is here.
Anyone who plans to participate catching lobster in Monroe County during the two day season on July 29th and 30th should make sure to familiarize themselves with both state law and with local ordinances in the Florida Keys.
Additionally, Sheriff Rick Ramsay would like to remind everyone who lives here and who is visiting, marine thefts are a real problem in the Florida Keys and thieves may see the two day sport season as an opportunity to target people who aren’t being careful with their valuables. Make sure you remove electronics, fishing and diving gear from your boat when you aren’t on it and store this valuable equipment somewhere secure.
During the two day sport season, the Sheriff’s Office will have extra patrols at boat ramps, bridges and on the water. Anyone caught with illegal lobster will be charged accordingly. All Sheriff’s Office boats will be on patrol, and deputies will also be operating a number of WaveRunners donated to the Sheriff’s Office by Riva South Motorsports. Riva South donates the WaveRunners each year to be used for law enforcement purposes such as this, as well as for regular patrols of hard to reach shoreline areas and residential canals.


According to state law, during the two-day sport lobster season, recreational divers and snorkelers can take up to six lobsters per person daily in Monroe County. Spiny lobsters must have a carapace length greater than 3 inches to be legally taken during the open season. Divers must possess a measuring device, and lobsters must be in the water while they are measured. Harvest of egg-bearing females is prohibited. Spiny lobsters must remain in whole condition until they are brought to shore. Harvesters cannot use any device that might puncture, penetrate or crush the shell of the lobster. Night diving for spiny lobsters during the two-day sport season is not allowed in Monroe County, and all harvest of lobsters is prohibited in John Pennekamp Coral Reef State Park during the two-day season. Lobster harvest is also prohibited at all times in Everglades National Park, Dry Tortugas National Park, Biscayne Bay/Card Sound Spiny Lobster Sanctuary, certain areas in Pennekamp Park, and no-take areas in the Florida Keys National Marine Sanctuary.
A Monroe County ordinance makes it “unlawful for any person to dive or snorkel in any manmade water body or marina, or within 300 feet of an improved residential or commercial shoreline beginning three days prior to the opening of and during the entirety of the lobster mini-season and for the first five days of commercial lobster season.” This ordinance also applies in the cities of Marathon and Islamorada. The only difference is in Marathon, the restrictions apply for four days prior to the sport lobster season and until 10 days past the beginning of the commercial season.
You must have a recreational saltwater fishing license and a spiny lobster permit to recreationally harvest spiny lobsters unless you are exempt from recreational license requirements. Information about these licenses and permits is available online at MyFWC.com/License.
Before, during and just after the two day sport season there will be more boats and trailers on the roadways, and more traffic in general. Sheriff Ramsay wants to remind everyone to drive carefully. Pay attention to those around you, be patient and don’t pass in no passing zones. Drinking and driving is, of course, illegal; drunk boating is also illegal and our officers will be watching for this dangerous behavior on the water as well as on the roadways of the county.
“We enjoy all the visitors here in the Keys during the two day sport season,” said Sheriff Ramsay. “But we want to make sure everyone is aware of the law, and is behaving in a responsible, and safe, manner.”
More information is available athttp://myfwc.com/fishing/saltwater/recreational/lobster

What do you think about Mini Season?

Posted by Suzi Youngberg at 11:17:00 AM
Email ThisBlogThis!Share to TwitterShare to FacebookShare to Pinterest
Labels: Island Living