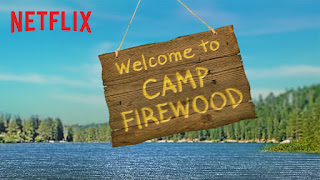 Yes, Campers, they are back!

Fans of the 2001 movie, "Wet Hot American Summer," will be sure to enjoy this newest Netflix series.

The movie was a bit of a box office disappointment, but has since gained a cult following.  The popularity of the movie has prompted Netflix to produce this prequel.

Where the movie takes place on the last day of summer camp at Camp Firewood, the first season of the series all happens during the course of the first day of camp, summer 1981.

Nearly every one of the adult cast of the movie have returned to reprise their roles in the series, along with some new faces.  Remember, these were adult actors portraying teenagers 15 years ago, and now they are playing those same teen characters again.  Some pull it off better than others! 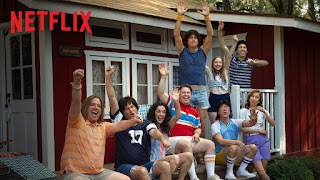 If you read the Featured Movie: Wet Hot Summer review, you know that I called the movie a hoot.
Well, the show is all that and more!  While fans of the original movie are sure to enjoy it, it might not have the same appeal for those not in the know.  There is something of the ridiculous about it, and yet I couldn't seem to stop watching.

Being a prequel, you get answers to questions like: Why does the can of vegetables talk?
(Once again, voiced by the hilarious H. Jon Benjamin, the can of veggies may be my favorite character!)

The big adventure in the movie was a piece of Skylab falling to earth, on a beeline for the camp rec center.  In the new series, the counselors find that the government has been dumping toxic waste in the woods just outside of camp.  When the "powers that be" realize they have been found out, the white house orders an assassin, The Falcon, to destroy the camp and kill the counselors.  All the while, rehearsals for the big talent show continue...

We binged watched the entire series in one evening.
The episodes are short and the whole thing takes place in one day, so it flows well for binge watching.
A fun and entertaining ride! 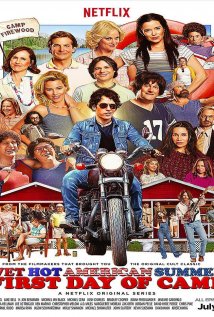 What did you think of "First Day Of Camp?"